In a string of unfavorable news, all against the best interests of Ethiopia coming out from the US leadership on State and Federal levels, one got to ask WHY? What the heck is the problem?

The two senators from the State that’s turned into a sh**hole by radical Oromos/Al Shabab towelheads were steered into calling for the release of terrorists like Jawar and his likes who were responsible for the deaths of hundreds of innocent civilians including pregnant women. Its not a secret that the incestuous Ilhan Omar is behind supporting Islamist Radical Oromos who are also backed by the Al Shabab right under the noses of US authorities.
And now, Mike Pompeo who was humiliated by the actions of the Ethiopian government that courageously defied his pro-Egyptian proposal to stop the progress of the GERD project, decided to stop US aid in the tune of hundreds of millions of dollars.

That defiance could have been interpreted as a pride and strength from a US allied nation in that troublesome, geopolitically important yet excessively fragile corner in Africa. But Ethiopia is hardly a stable country. Its on a brink of collapse because of ragtag Qeros wreaking havoc in the Oromia region, decimating towns, cities, infrastructures, businesses and innocent lives while high ranking government officials are busy covering that up if not supporting the mayhem.

The Prime Minister is high in his utopian dream and never waking up to the reality. Surrounded by those thirsty of blood and aspiring for a full blown out genocide, he still appoints the worst and the dirtiest minds to high government positions in a move that feels like an insult against his own people.

With all what is going on, why would the US favor Ethiopia?
Egypt is a stable country. The army is disciplined enough to protect its citizens. It doesn’t take orders to shoot its own people or help genociders massacre the innocent. Its a nation that works diligently to become a leader on the world stage. Its a nation that doesn’t have to deal with its own people to stay alive. Regardless of its majority Muslim population, its a country that outlawed Muslim Brotherhood and other radical Muslim groups to protect religious minorities. The Coptic Orthodox Christians in Egypt didn’t care a bit about their religious affiliation with the 50 million strong Ethiopian Orthodox Christians who have protected snd enriched them for 2 millennia. In fact, Egypt’s richest citizen, a Coptic Orthodox Christian spoke out against Ethiopia in favour of his Muslim majority country where his community existed in never ending plight. Egyptian historians and their government are all the most determined to glorify their history.

Whereas, Ethiopia is not blessed with such kind of people anymore. The government is against its millions of people which it thinks it doesn’t identify with. The army is our own enemy. And Ethiopians, if we don’t know eachother, we don’t trust to have a conversation about our country between us. When you think you run into another Ethiopian who looks like you and who buys injera right next to where you are standing, won’t even talk to you claiming he/she is from Oromia. Our government and its minted historians have tirelessly and successfully labored to distort our history.
That’s why we are not favoured.

And please don’t say you don’t care because God favors you. Newsflash…He doesn’t. When you fail to secure the release of 17 innocent girls, when you fail to save pregnant women from getting slaughtered infront of their husbands and children, when you fail to have a fear of God..enough to keep you away from killing the elderly or any innocent life, how can you claim to be a devout Christian, Muslim or an atheist with principles? No, God doesn’t favor you.
We have a country, a beautiful, historical country with the WRONG people. Period. All the right ones are lying underneath. The breathing good ones are incapacitated.
She has become “COUNTRY OF THE APES”..not to be confused with Planet of the Apes.
BKS 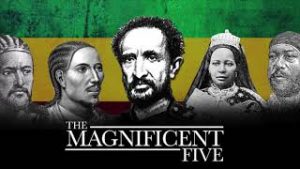 Next post Ethiopia’s political crisis plays out in the regions. Why it’s a federal problem
Ethiopian Tribune editor