It is with the utmost pleasure that we would like to announce that, on Wednesday, October 19th, 2022, in Kingston, Jamaica, Prince Ermias Sahle-Selassie Haile Selassie, on behalf of the Crown Council of Ethiopia, and The Honorable Madame Olivia Grange, on behalf of the Jamaican Government, in the presence of Crown Council delegation and advisors as well as media, signed a Memorandum of Understanding (MOU)

The MOU also establishes that both Parties shall collaboratively work together to foster and build upon the relations that were established pursuant to the State Visit made by Emperor Haile Selassie in 1966 in the areas of Education, Sports, Culture, Tourism and Trade.

It should also be noted that under the leadership and vision of HIH Prince Ermias Sahle-Selassie, Lij Nebyat A Demessie, PR & Advisor to the Crown, privately spoke with the Jamaican Prime Minister Andrew Michael Holness in regards to building a statue of HIM Emperor Haile Selassie in Jamaica. The PM responded affirmatively to the idea and also suggested that the Statue of HIM Emperor Haile Selassie should be erected in the National Heroes Park where monuments, busts and statues of Jamaica’s National heroes including the Honorable Marcus Mosiah Garvey exist.

HIH Prince Ermias Sahle-Selassie and Lij Nebyat A Demessie also had discussions with top reggae artists who agreed to partake in a Benefits Concert to cover expenses associated with the rendering, design and build out of a statue in honor of HIM Emperor Haile Selassie.

It should be noted that the entire Crown Council delegation was invited because of and as a result of HIH Prince Ermias’ vision, dedication, commitment and consistent work over many years to ensure that the visibility and legacy of the Crown persists.

It is important to mention that HIH Prince Ermias, in addition to serving in his role as President of the Crown Council of Ethiopia he also serves in the capacity of a Cultural Ambassador, representing and exuding Ethiopianism with the utmost grace, pride and dignity. 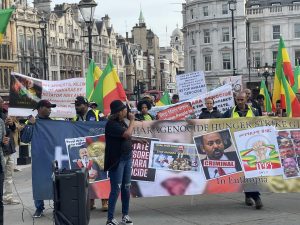