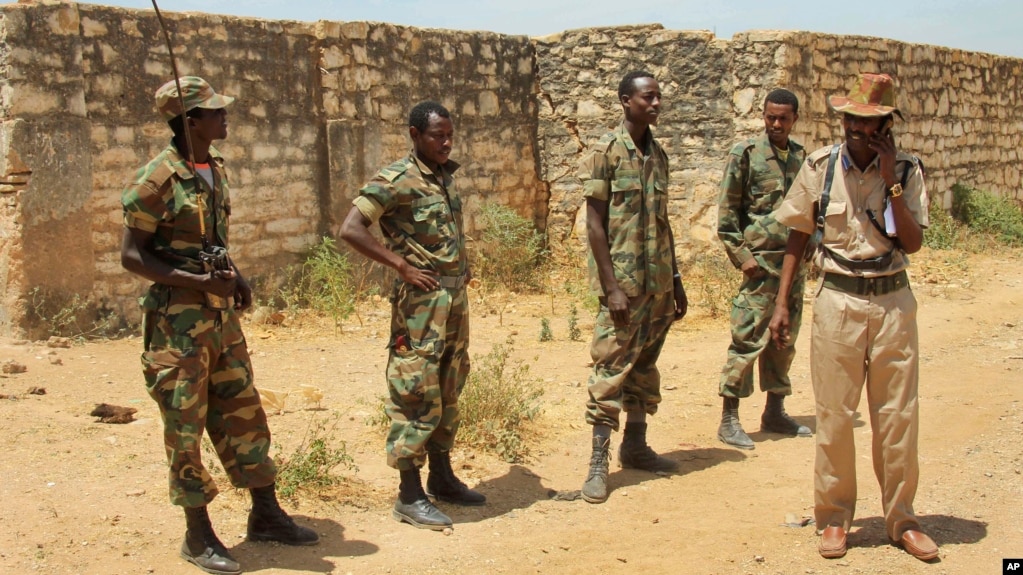 Gedo’s regional administration spokesman, Ali Yussuf Abdullahi, said the Ethiopian troops have been coming to the region since the end of last week and established bases in and around the border town of Dolow.

Abdullahi, also known as Ali Juba, spoke with VOA via phone Monday and said the troops, numbering about 2,000, were deployed to fight al-Shabab militants who started to gather large numbers of fighters near the border.

Abdullahi said he wanted to tell Somalia’s people that a new problem has arisen from al-Shabab that continues in Hiran, Bakol and Gedo. Abdullahi said Gedo administration authorities are impacted by the terrorist group’s new attacks in the border areas with Ethiopia. Because of the increase in insecurity, he said, al-Shabab militants infiltrated border areas and that it is necessary to cooperate with Ethiopia. That’s why new troops have arrived and are staying in and around Dolow, he said.

Regional experts said they believe al-Shabab wants to establish a presence in Ethiopia.

Meanwhile, Abdullahi told VOA that an Ethiopian airstrike hit several al-Shabab positions in the Gedo region, including the vicinity of Kabas, where al-Shabab militants were gathering to launch an attack into Ethiopia. He said the airstrike was conducted in coordination with the Ethiopian military and Somalia’s Jubaland state authorities.

Asked whether the federal government of Somalia knew about the arrival of Ethiopia’s fresh non-African Union mission troops in the region, he replied by saying that the government knew the troops were coming to fight the militant group.

The Ethiopian troop deployment in Somalia comes after the Ethiopian military said its security forces killed more than 800 al-Shabab fighters in response to a rare cross-border attack.

The Ethiopian military also said 24 top al-Shabab leaders were among those killed in recent operations against the terrorist group. Late last month, hundreds of al-Shabab fighters crossed Somalia’s border with Ethiopia and clashed with specially trained counterterrorism forces known as the Liyu police.

The group entered Ethiopia at several sites from Somalia’s border regions of Hiran and Bakool, according to security officials.

U.S. assessments suggest al-Shabab fighters may have gone as far as 150 kilometers into Ethiopia before being deterred.

A Horn of Africa analyst recently told VOA that domestic unrest in Ethiopia and the concentration of troops in its Tigray conflict make this an opportune time for al-Shabab to strike.

After recent suspected Ethiopian military airstrikes in the region of Hiran, al-Shabab militants destroyed the antennas of the privately owned telecommunications companies in the region.

Al-Shabab has been fighting Somali government and AU peacekeepers since 2007. It also carried out deadly attacks into neighboring Kenya and one in Uganda.