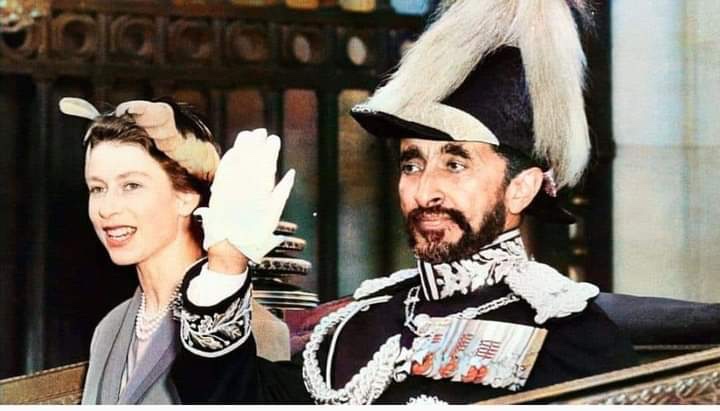 A Statement by the President of the Crown Council of Ethiopia, His Imperial Highness Prince Ermias Sahle-Selassie Haile-Selassie ጳጉሜ 5, 2014 (September 10, 2022)

Her Majesty Queen Elizabeth II fulfilled her promise to God and her duty to her People and all of the People of the World on ጳጉሜ 3, 2014 (September 8, 2022), and was given rest. We mourn and exalt her, particularly for her abiding friendship and commitment to the People of Ethiopia and to our own late ግርማዊ ንጉሠ ነገሥት Haile Selassie I.

Queen Elizabeth swore to the Almighty that she would, as long as she lived, serve her People, and was anointed by God to do so. In that, and in the fulfillment of that promise, she was alike with our own beloved Emperor. They drew breath and were anointed of God only to serve, and to serve well with courage, wisdom, restraint, and kindness.
Her Majesty Queen Elizabeth and Emperor Haile Selassie were greatly devoted to each other and to the welfare of each other’s societies.

Queen Elizabeth visited Ethiopia to pay tribute to the Emperor, and it was her father, the King Emperor George VI, who gave refuge to our Emperor during the Second Italian invasion of Ethiopia, assisting him in preparing and waging the great battles to restore Ethiopia to its people after five years of brutal occupation. Little wonder that our Emperor saw in the manner of Queen Elizabeth’s reign over the end of the colonial period and the institution of stable constitutional monarchy a model for how Ethiopia could succeed in moving, itself, toward constitutional monarchy and democracy.

Her Majesty bestowed upon our Emperor, my Grandfather, two great gifts unique to such an ally: he was created a Knight of the Garter, Britain’s highest honour; and he was made a Field Marshal of the British Army. ጃንሆይ Haile Selassie bestowed upon Her Majesty and her Consort,

Prince Philip, the highest Orders within the Solomonic gift. In every sense, they bowed to each other, with the compassion of understanding of the great things which harnessed them together in the service of their People.

Queen Elizabeth continued to represent continuity with the Emperor and Ethiopia, in many
respects, after the coup of መስከረም 1967 (1974) and regicide (ነሐሴ 21, 1967) against the
Emperor, giving refuge and aid where possible to those of the Imperial Family who were exiled in the United Kingdom and unable to return to their homeland.

I was such a beneficiary of this kindness and understood intimately that the Queen and the British People were also the family and protectors of their Ethiopian Solomonic cousins.

Her Majesty retained her commitment to the People of Ethiopia even as her health declined. In 2021 she actively participated in the shaping the design of the Ethiopian Crown Council’s Victory of Gondar Medal, which, with its issue on November 21, 2021 (ኅዳር 12, 2014), celebrated the 80th anniversary of the joint Ethiopian-British (and Commonwealth) efforts to defeat the Italian occupation in ኅዳር 1934 (November 1941). The medal finally brought recognition to the thousands of Patriots (አርበኞች) and members of the British and Commonwealth forces who died to liberate Ethiopia, and Her Majesty played a role in that.

So Her Majesty never forgot us, as we will never forget her. She worked to bring Ethiopia into the greater community of global leadership out of respect for our Emperor and our Solomonic line, which gives us the oldest unbroken link to the time of King Solomon and Queen Makeda of Saba.

Her son, now His Majesty King Charles III, has been highly conscious of our shared links as Peoples. He has seen so many times our Emperor’s standard and arms in the chapel for the Order of the Garter, in Windsor, and was aware of Her Majesty’s abiding friendship with Ethiopia. So we share his grief at the passing of his beloved Mother in a way that shared families can share such feelings. And we wish him long life in his Great Service; as long a life as can be dreamed, and more, after his patient decades of apprenticeship for the Throne.

We, the Ethiopian Crown and People, wish him well, and offer him the same shared feeling of family that we have for so long felt with his Crown. We together face the turbulent future, knowing that what we can do to reflect the nobility, identity, and values of our People will determine the fate, safety, and wellbeing of our nations. We can do that together.

There can be no higher calling than that.
God Bless Queen Elizabeth II; go with our tears of thanks.
Long Live King Charles III; go forward with our hopes and prayers.