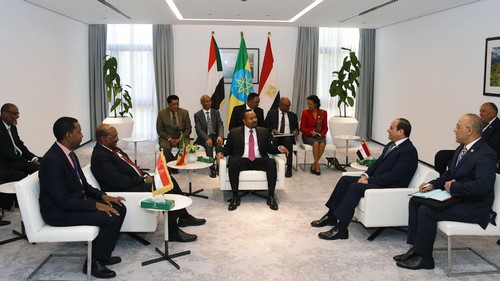 Ethiopian Prime Minister Abiy Ahmed, Egyptian President Abdel Fattah al-Sisi and Sudans President Omar Al Bashir take part in a tripartite summit
The United States has temporarily suspended some aid to Ethiopia over the country’s decision to fill a hydropower dam on the River Nile before reaching an agreement with Egypt and Sudan on the management of the project.

“Due to Ethiopia’s unilateral decision to fill the Grand Ethiopian Renaissance Dam (GERD) without an agreement with Egypt and Sudan, the Secretary of State, based on guidance from the President, has decided to put a temporary pause on certain U.S. foreign assistance for Ethiopia,” the U.S. State Department said.

Ethiopia is building what would be Africa’s largest hydroelectric power dam, the Grand Ethiopian Renaissance Dam (GERD), on the main tributary of the River Nile in northwest Ethiopia. When completed in 2023, it will produce some 6,000 megawatts of power, a project the country sees bringing much-needed development. Some 65 million Ethiopians have no access to electricity, and 86 percent of the Nile waters flow from Ethiopia.

The first-stage filling was achieved in July this year before a substantive agreement between Ethiopia and the two downstream countries, Egypt and Sudan. Egypt – which depends on the River Nile for most of its freshwater needs – and neighbouring Sudan are opposed to the development and have been in negotiations for nearly a decade.

In November of 2019, the three countries started new talks mediated by the US Treasury and the World Bank, after previous attempts at an agreement failed. However, at the end of the talks, Ethiopia walked away without signing an agreement, bringing yet another deadlock.

The negotiations were also discussed at the United Nations Security Council before the African Union took over the matter in July, yielding few results so far. The US has now temporarily suspended aid worth $130 million to Ethiopia.

“We understand that the issue is Temporary Pause,” Fitsum Arega, the Ethiopian ambassador to the US said on Twitter, confirming the suspension. “The dam is ours! We will finish it together! With our efforts, our Ethiopia will shine!”

Construction of the GERD is three-quarters done, and plans to test two turbines by March next year are on schedule. Ethiopia plans to start the first phase of electricity production by June of 2021. However, the project is five years late and over budget. It was initially estimated to cost 78.3 billion Birr ($4.8 billion), but the country has spent 125 billion Birr ($3.3 billion) so far, and needs an additional 36.5 billion Birr ($978 million) to complete.

“GERD, today or in the future, is the indication that will not welcome any colonial ideas. This project will confirm Ethiopia’s sovereignty,” Ethiopian Prime Minister Abiy Ahmed said in an August project update.

The key areas of contention are around filling and operating the dam, especially during prolonged years of drought. There are also legal areas of contention, including the future use of water and conflict resolution mechanisms. Ethiopia doesn’t believe future developments should be based on the rules and guidelines of the current dam.

“There is a fierce discussion on this,” Ethiopia’s Minister of Water, Irrigation and Energy, Seleshi Bekele, said in a press briefing in July. “The rules and guidelines need to be improved after ten years, that’s Ethiopia’s position.”

The construction of the dam was inaugurated in April, 2011 by the late Prime Minister Meles Zenawi. Initially called the Millennium Dam, it would be built by the Italian company Salini for $4.8 billion, with financing coming from Ethiopia via the sale of bonds and cash contributions. The announcement was a surprise to Egypt.

The only other large development on the Nile is the Aswan High Dam in Egypt, which was completed in 1970. In Ethiopia, rain-fed agriculture, on which the majority of the population depends, has been unreliable, with periodic droughts. The dam could also help the lower stream countries, especially during years of floods, like those seen this year in Sudan. Ethiopia expects to earn as much as $1 billion annually from power exports to neighbouring countries.