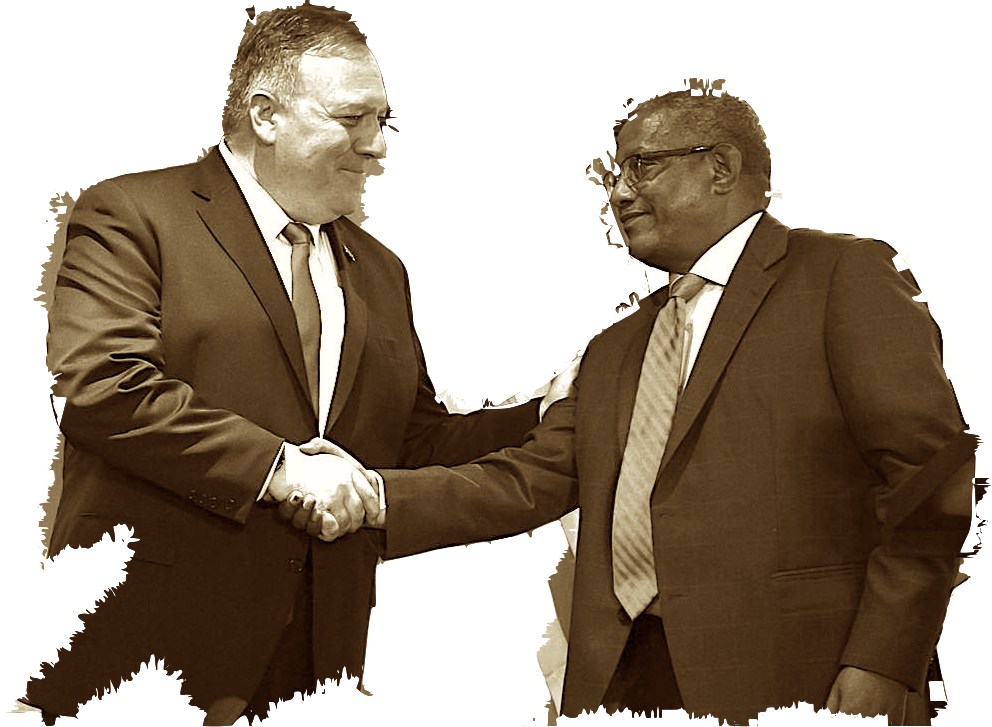 On August 27, Foreign Policy reported that Secretary of State Mike Pompeo was considering suspending $130 million worth of US aid to Ethiopia. Within less than a week, the US on the orders of President Trump suspended some of the aid, in the hope that such action would cajole Addis Ababa to reach an agreement over the Grand Ethiopian Renaissance Dam (GERD) with Egypt. The view from Washington DC is that they want an agreement reached before Ethiopia continues to fill the dam.

The American decision shows a limited understanding of the GERD, Horn of Africa geopolitics, and that a transactional foreign has many limitations. Fundamentally, the decision does not further American interests in the region, but rather weakens it as Ethiopia can easily find others to make up the shortfall.

Construction for the $4.8 billion the GERD begun in April 2011. The Dam, which draws water from the Blue Nile, should hold 74 billion cubic metres. It is expected to generate up to 6,000 megawatts of power and in doing so address Ethiopia’s energy insecurity: around 60 million Ethiopians have no access to electricity or very limited access. Moreover, the Ethiopian government was also hoping to export energy to some of its neighbours thus earning the country valuable foreign currency. Thus, the dam has become an important national symbol, with popular musicians releasing songs exalting the construction and what it would mean to Ethiopians ordinary people, as the government sold the dam to the people as the great panacea for Ethiopia’s energy insecurity.

The GERD as expected has become a major issue, primarily for Egypt, which relies extensively on the Nile. Egyptians are concerned that the dam would siphon off much of the water that Egypt needs for its burgeoning population, agriculture, and industry. There have been many attempts at negotiation, some sponsored by the United States and some by the African Union. But to date, no resolution to the dispute has been reached in part because Egypt cannot accept that it does not have full control over the Nile. Conversely, for Ethiopia, the GERD is the great hope for a better tomorrow.

One reason why the US decision is unlikely to encourage the Ethiopian government to change course stems from the recognition that Abiy Ahmed Ali is under enormous domestic pressures and compromising on the dam would only weaken his position. Abiy is dealing with anger at the way his government went about postponing the federal elections, leading to accusations of authoritarianism. Abiy is also contending with anger at the way the security services responded to the killing of musician-activist, Hachalu Hundessa, on 29, including the decision to arrest and detain thousands of people, many of whom are opponents of the government. There is also unhappiness with how the government has dealt with the Tigray Regional Zone, the centre of Abiy’s key political opponents, the Tigray for Democracy and Justice Party, and its demandto hold a regional election, which it has since held. The conflict with the Tigray stems in part from Tigray’s unhappiness of losing political power, which they have held since 1991, even though they account for about 5% of the population. The push for regional election emphasises growing demand by Ethiopia’s many ethnic groups for more power at the expense of the federation.

Another major challenge for Abiy is the state of the economy. He came to power on the back of an ambitious economic policy aimed at liberalising such sectors as telecommunication and finance but theCOVID-19 pandemic has derailed much of that program. Some of the measures adopted to combat the spread have had a dire impact on key sectors primarily agriculture but also construction. For example, the travel restrictions have affected the agriculture sector, already under pressure from desert locust infestations and perpetual underinvestment. It was therefore unsurprising to learn that in a World Bank survey many Ethiopians expressed great apprehension for the future.

Several things are working in Abiy’s favour as we look at the American decision to suspend the aid and why it is unlikely to dissuade the Ethiopians from reaching an agreement first with Egypt. The first is China. Sino-Ethiopian relations, which began in 1970, have always been strong. Early onBeijing recognised Ethiopia’s geostrategic importance whether in respect to its African policy (Addis Ababa is home to the African Union) or to Beijing’s revisionist foreign policy as symbolised by the Belt and Road Initiative (BRI).

Ethiopia was quick to sign up to the BRI, seeing it as a way to gain needed capital and expertise as successive governments seek to develop Ethiopia. China and Chinese companies provide capital for the construction of the Ethiopia-Djibouti Railway, it constructs roads, a national sports stadium, and it has supported the construction of the dam. China has also provided humanitarian and specifically COVID-19 assistance to Ethiopia, includinghelping Ethiopia manufacture its COVID-19 test kits instead of relying on others. These are just some of the measures undertaken by Beijing to ensure that it has a strong footing in Ethiopia. Abiy knows he can rely on Beijing, which wants access to one of Africa’s fastest growing population.

A second thing working for Abiy is that he does have international support. Soon after coming to power in 2018, he reached out to Ethiopia’s long time enemy Eritrea and made important concessions such as giving up the village of Badme, which was awarded to Eritrea in 2002, without any preconditions. This led him to a Noble Peace Prize. Abiy has also benefitted from having a progressive domestic policy including releasing countless high-profile political prisoners.

The US decision, which allegedly was made by President Trump, is shortsighted because the size of the aid is relatively small to entice Addis Ababa to change course. Moreover, the cut will not affect US humanitarian assistance to Ethiopia, which has remained unaffected as USAID recognises over 16 million people need aid because of COVID-19 and other crises such as the locust infestation and climate change.

Secondly, Abiy knows that slowing down the filling up process or making significant concessions to Egypt would infuriate many Ethiopians who are looking to the dam as a panacea and the beginning of a golden tomorrow.

Thirdly, Abiy has support from key riparian states who are supportive of the dam and see the potential for their energy security. There is more distaste towards Egyptian attitude, with many of the affected states taking the view that Egypt has bullied the region for too long. Concomitantly, having President Trump in your corner when it comes to African affairs is not necessarily a good thing, as many on the continent, which he has never visited,remember the disparaging comments he has made towards the continent and its people.

Fourthly, Abiy knows that he can easily replace American aid, as countries recognise Ethiopia’s importance as it is a huge country, with over 100 million people many of whom are young and who look to benefit from the fruits of industrialisation. Moreover, it is believed that President Trump intervened because he supports President al-Sisi, an authoritarian leader. In other words, the US President is preferring an authoritarian, unpopular leader over a democratically elected popular leader.

To have a transactional foreign policy one need to have leverage but in this specific instance, the United States has seriously overestimated its leverage, thus limiting its ability to affect change and becoming less relevant in the Horn of Africa, at a time when China is cementing its presence in this crucial region.

This article is republished from Moderndiplomacy under a Creative Commons license. Read the original article.