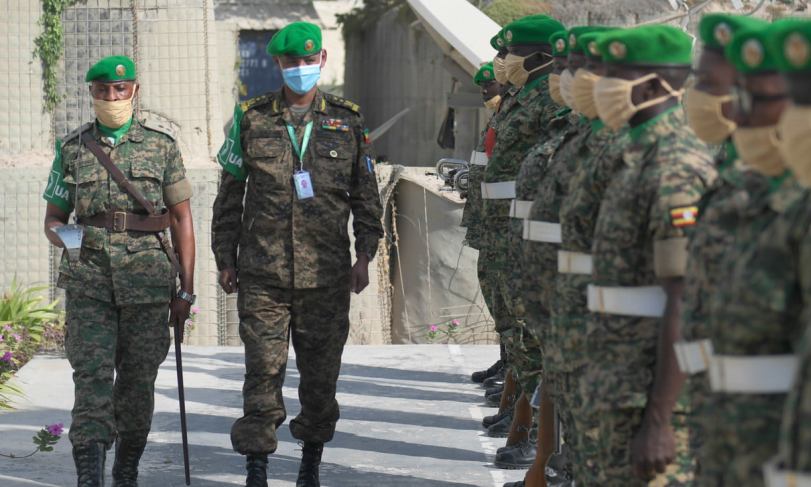 The Deputy Force Commander of the African Union Mission in Somalia, (AMISOM), Maj. Gen Gerbi Regassa Kebede met commanders of the AMISOM Ugandan contingent as part of a familiarisation since he assumed duties.

Maj Gen Kebede from the Ethiopia National Defence Forces recently assumed office as the Deputy Force Commander in charge of Support and Logistics. He took over from Maj. Gen. George Owinow from the Kenya Defence Forces.

While meeting officers at the Ugandan contingent headquarters in Mogadishu, Maj Gen Kebede lauded the AMISOM Ugandan troops for contributing to Somalia’s stability.

Uganda was the first country to deploy troops under AMISOM in March 2007, and is one of the five AMISOM troop-contributing countries, alongside Burundi, Djibouti, Ethiopia and Kenya.

During the meeting, the Ugandan commanders briefed Maj. Gen. Kebede on the security situation in their areas of responsibility.

In his remarks, Maj. Gen. Kebede called for increased collaboration amongst troop-contributing countries to degrade Al-Shabaab terror group, which remains a threat to Somalia’s stability.

“Despite the constraints we face, we have the willingness to work together and can collaborate and overcome some of our challenges,” he said.

Maj Gen. Kebede also called on the troops to operate within existing AU guidelines for peace support operations and pledged to ensure effective delivery of required logistical support to the troops during the Somalia Transition Plan’s implementation phase.