The African Union has set October 24 in South Africa as the date and place for peace talks aimed at ending the war in Ethiopia’s Tigray region, according to an Ethiopian official.

The announcement from Redwan Hussein, the national security adviser for Ethiopia’s prime minister, came days after the federal government reported on the capture of three strategic towns in Tigray, including Shire, which hosts large numbers of people uprooted by the war.

In recent days, diplomats have urged the federal government and Tigrayan forces to agree to an immediate cease-fire, with U.N. Secretary General Antonio Guterres warning Monday that the situation in northern Ethiopia is “spiraling out of control.”

African Union-led peace talks were supposed to take place earlier this month in South Africa, with both the Tigray rebels and the federal government saying they were ready to participate. The talks were delayed due to logistical issues.

Redwan said Thursday on Twitter that the federal government has “reconfirmed our commitment to participate” in talks mediated by the AU.

“However, we are dismayed that some are bent on preempting the peace talks & spreading false allegations against the defensive measures,” he added, an indirect reference to recent statements from Western officials expressing alarm over reports of attacks on civilians.

The federal government said this week that it was planning to take control of Tigray’s airports and federal institutions in order to “safeguard the sovereignty and territorial integrity of the country.”

EU foreign policy chief Josep Borrell said Monday that the “EU deplores the escalation of violence and irreparable cost to human life” in Ethiopia and urged the parties to begin peace talks “without delay.”

A recent U.N. report found that all sides have committed human rights abuses since the conflict broke out in November 2020. Hundreds of thousands of people reportedly have been killed.

Samantha Power, who heads the U.S. Agency for International Development, warned Sunday that there is a “significant risk of further assaults and killings being perpetrated against civilians” if the fighting engulfs camps for displaced people in Tigray.

The Tigray rebels did not immediately confirm their participation in the talks in South Africa on October 24 but have previously committed to participating in a peace process overseen by the AU. 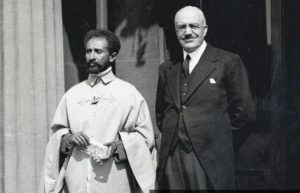 Previous post 68 years ago H.I.M. HaileSelassie I honoured with “The Freedom of the City” by city of Bath.