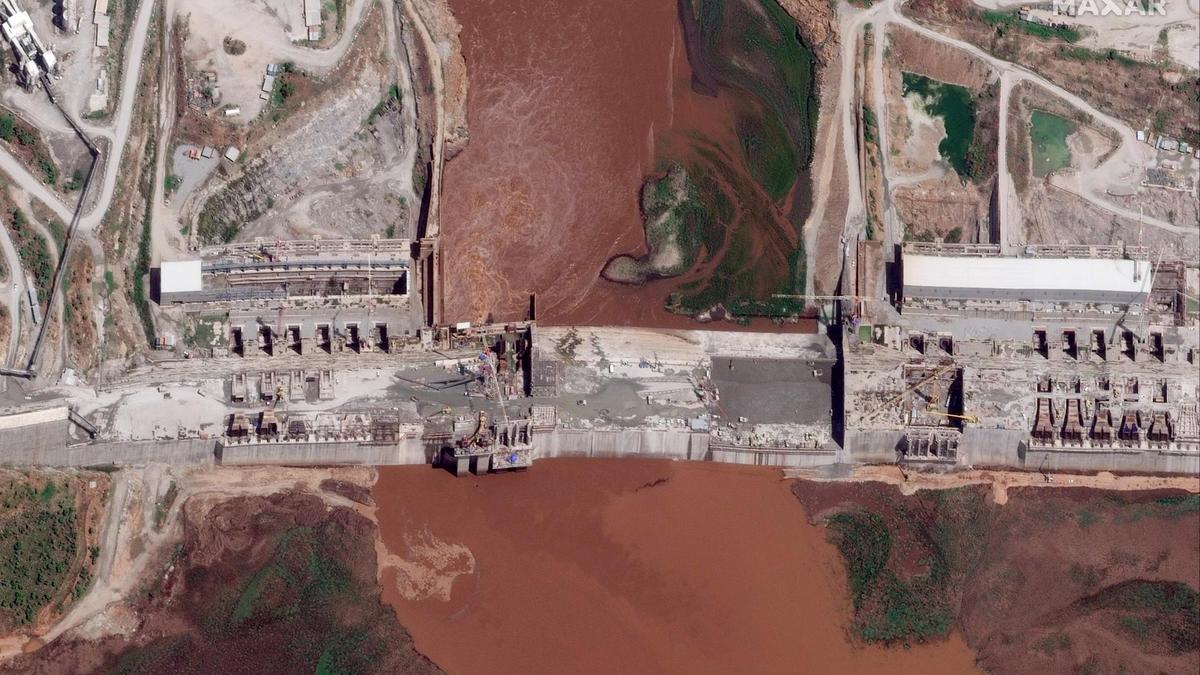 Egypt’s foreign minister said on Thursday that initial technical assessments show his country would not be harmed by the second and much larger filling of a disputed hydroelectric dam being built by Ethiopia on the Blue Nile.

Mr Shoukry’s comments also seemed designed to check the rise of calls in Egyptian media for Cairo to take military action after the latest round of talks over the dam reached a deadlock this month.

The most populous Arab nation, with 100 million people, Egypt depends on the Nile for more than 90 per cent of its fresh water needs.

A steep cut in its share of water from the river would wipe out hundreds of thousands of jobs and disrupt its delicate food balance.

The Blue Nile, with its source in Ethiopia, accounts for more than 80 per cent of Nile water.

But Mr Shoukry warned that Egypt would not tolerate “huge harm” Sudan could suffer from the filling, which is due in July.

Sudan has said the filling could put at risk the lives of 20 million people and disrupt work at its power-generating dams on the Blue Nile.

“The initial technical assessment shows that there will be no damage [to Egypt] from the second filling, but a more accurate assessment will be the one carried out on the ground and that’s something state agencies are monitoring on daily basis,” Mr Shoukry told legislators.

“It’s an existential issue for the future of Egyptians. We can show no laxity in dealing with it. We deal with the issue with the utmost seriousness and commitment.”

Egypt would not take lightly any harm done to its interests by the second filling, the minister reaffirmed.

“If any harm is done, all state institutions will confront and remove it,” Mr Shoukry said. “The potentially huge harm will be in Sudan and we cannot accept that.”

Last year’s filling was carried out without consultations with Egypt and Sudan.

While Egypt was not affected because of a bumper Nile flood that filled its Aswan Dam reservoir close to capacity, Sudan said it disrupted work at its water treatment plants, leaving thousands of homes without running water for days.

Ethiopia has said it intends to go ahead with the second filling, involving 13.5 billion cubic metres, whether or not an agreement on the operation and filling of the dam was reached with Egypt and Sudan.

Its offer of consultations specifically dealing with the second filling has been rejected.

Egypt and Sudan insist on a legally binding deal that includes ways to resolve disputes and deal with persistent future droughts.

On Thursday, Ethiopia blamed Egypt and Sudan for the failure of the latest round of talks held in Kinshasa, capital of the Democratic Republic of Congo, the current chair of the African Union.

Ethiopia’s Foreign Ministry spokesman Dina Mufti claimed that the Sudanese military was serving the interests of a “party” other than Sudan when dealing with the dam issue.

It was a thinly veiled reference to Egypt, which has traditionally maintained close ties with Sudan.

Mr Mufti blamed Cairo and Khartoum for the failure of the Kinshasa talks, saying they deliberately prevented progress to justify the involvement of international parties in the process.

Ethiopia has rejected a Sudanese-Egyptian proposal to involve the US, the UN, EU and the African Union as mediators in the decade-long talks.

It says that the dam is an African issue that could only be resolved by Africans.