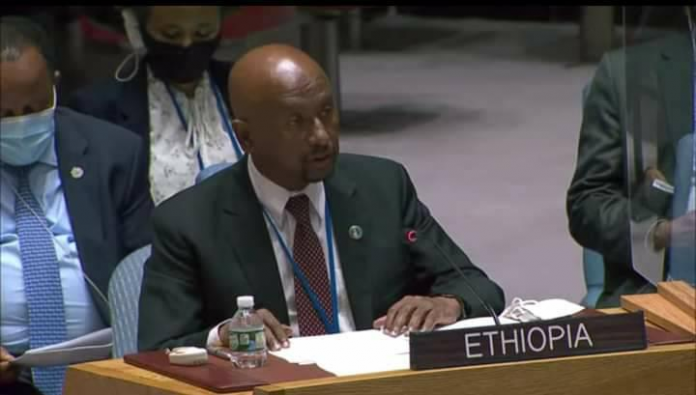 Ethiopia has urged Egyptian and Sudanese to understand that a resolution to the Nile issue won’t come from the Security Council; it can only come from good faith negotiations under the auspices of the AU with due care for the wellbeing and development of each other.

The remark was made by Minister of Water, Irrigation and Energy, Sileshi Bekele on Thursday at the United Nations Security Council (UNSC) open briefing on the issue of the Grand Ethiopian Renaissance Dam (GERD).

In his briefing the Minister said Ethiopians have best wishes and neighborly care for their compatriots in Egypt and Sudan and added “We have all the intention to live together in peace and cooperate for our mutual benefit. The GERD demonstrates this core principle of collective wellbeing and prosperity.”

Ethiopia believes that an agreement is within reach, given the necessary political will and the commitment to negotiate in good faith, Sileshi said.

Ethiopia’s longstanding commitment to the AU-led process is underpinned by a belief that Africans have the wisdom, the technical expertise, and more importantly, the agency to address their challenges, Sileshi underscored.

“The phased-approach proposed by AU Chair could help us break the quagmire,” he pointed out.

The minister further said in his briefing that “We’re dealing with a hydroelectric dam project, which is not the first of its kind in the world. We are building a reservoir to store water that will generate electricity by hitting turbines. For context, GERD reservoir is two and half times smaller than that of the Aswan Dam.”

Sileshi told the council that what distinguishes GERD from other projects is the extent of hope and aspiration it generated for 65 million Ethiopians that have no access to electricity. It’s also unique because the construction of the Dam is financed by the blood, tears, and sweat of ordinary Ethiopians.

The GERD is a people’s project and a humble attempt to realize the nation’s development needs he said adding that it’s the fingerprints of Ethiopia’s farmers, pastoralists, daily laborers, students, business owners, and the diaspora around the world who eke out a living in extremely difficult circumstances.

“We’re here because Egypt and Sudan have expressed their opposition to the GERD. Our two neighbors have large and small dams and canals they have constructed, with absolute disregard to the right of other riparian countries and rejecting Ethiopia’s request for consultation,” Sileshi stated.

Unlike Egypt and Sudan, Ethiopia has no considerable ground-water reserve, the minister stated, adding that “We also don’t have seawater to desalinate. Nearly 70 percent of my country’s water is in the Nile Basin. Even if we want to, even if we try, we cannot avoid utilizing the Nile River.”

According to the Minister, Ethiopia believes that an agreement is within reach, given the necessary political will and the commitment to negotiate in good faith. Understanding already reached on a number of the issues. The African Union is seized of the matter and is ably facilitating our negotiation.

The Security Council is faced with the question to determine whether or not Ethiopians have the right to utilize the Nile, Sileshe said.

“On behalf of all Ethiopians, I implore our friends in this Council to answer this question: ‘Do Ethiopians have the right to drink from the Nile?”

Despite the undue pressure, Ethiopia will continue to exercise maximum restraint and showcase cooperation the Minister indicated. Because, he added “we are forever linked by this majestic river. Whether we like it or not, we’ll continue to drink from the same river and must learn to live together as neighbors.”

The filling process is pure physics. Once the dam concrete reaches a certain height, the water either flows through the bottom outlets or overflows the concrete. This year the Dam will store water until it reaches the 13.5 billion cubic meters as indicated in the filling schedule.

“The Nile belongs to all the half billion people in the 11 riparian countries. The water is enough for all of us. Ethiopia generates 77 billion meter cube of water per year. It is only fair that we impound a small fraction of the annual inflow for its hydroelectric Dam.”

“We urge our Egyptian and Sudanese neighbors to understand that a resolution to the Nile issue won’t come from the Security Council; it can only come from good faith negotiations under the auspices of the AU with due care for the wellbeing and development of each other.”