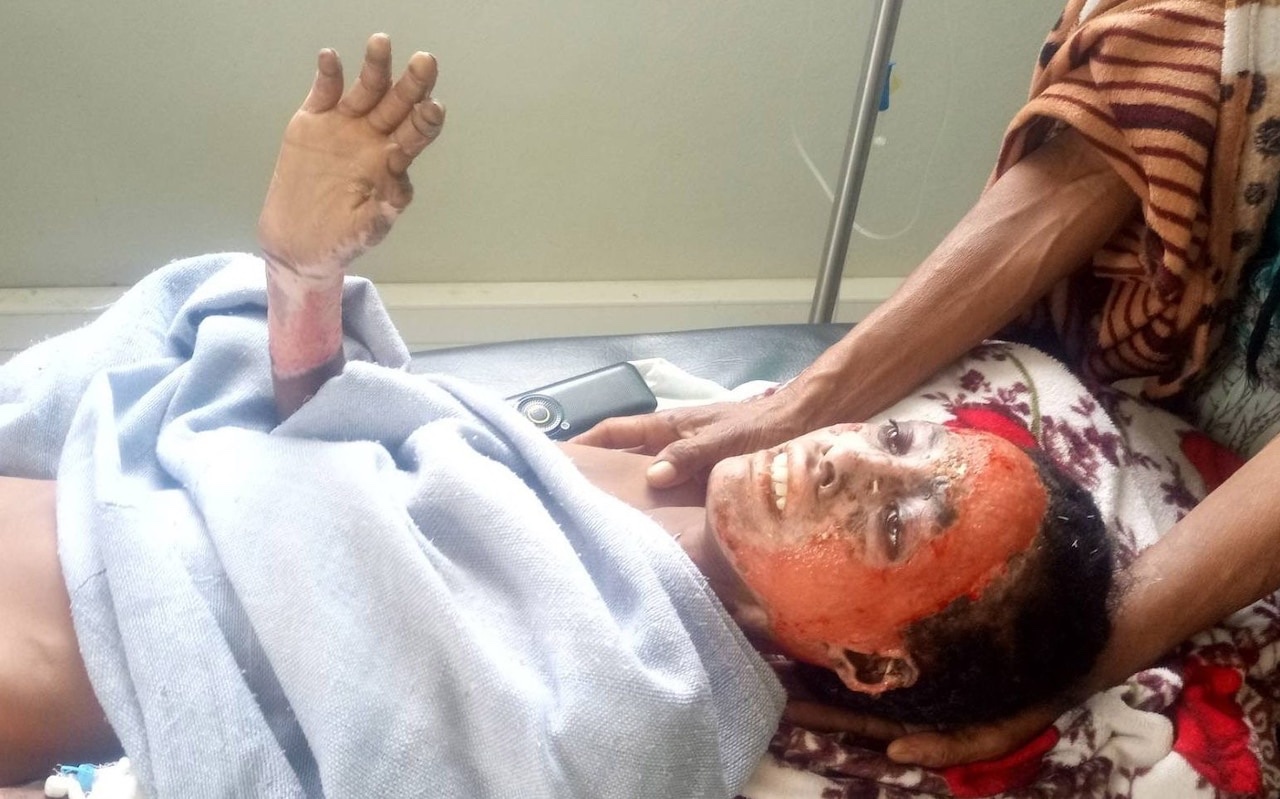 Civilians in northern Ethiopia have suffered horrific burns consistent with the use of white phosphorus, a potential war crime, the Telegraph can disclose.

Exclusive footage and accounts of witnesses and victims smuggled out of the war in Tigray suggests the Ethiopian and Eritrean armies may have used powerful incendiary weapons in civilian areas.

Leading chemical weapons experts said the footage is consistent with white phosphorus, which is banned from use against human targets under international law.

The victims include Kisanet Gebremicheal, a 13-year-old girl from the village of Adi’ayqoro in central Tigray who suffered agonising burns when her home came under attack on April 20.

“A heavy weapon hit the house, and fire fell from the roof,” she said on the phone inbetween sobs. “It burned me immediately. It had the smell of gunpowder.”

Footage taken in hospital shortly after Ms Gebremicheal made it to the medical centre shows her dark skin entirely burnt away from her arms, legs, face and hands — all that’s left is a white and red paste of flesh and fat.

“Oh, my heart. Oh, what the hell is this? Oh mum,” she wails as the nurses wrap her burnt, infected body as gently as they can. But the morphine does not work any more, so even her mother’s soft touch is agony.

White phosphorus is a chemical that catches fire when exposed to air and burns at more than 2,700 degrees Celsius. Like the napalm used in the Vietnam War, it self-oxidises, meaning it is almost impossible to put out once it touches human skin.

The incendiary chemical lies in a legal grey zone. It can be used legally to illuminate the battlefield at night or to provide tactical smoke screens. But its use against people can be classified as a war crime under the United Nations’ Geneva Conventions.

“White phosphorous has been used in Syria as an incendiary device to set fire to towns and villages and to drive civilians out of areas the Syrian Army wants to capture. It was very effective.

“The UN and other bodies were called to investigate. But nobody would, and nobody condemned its use because it’s very hard to prove it was used with ‘intent’ against people.”

“Because of this inaction, I expect every dictator and rogue state believed that they could use these horrifically effective munitions with impunity. And this seems to be the case in Tigray,” adds Mr de Bretton Gordon, author of ‘Chemical Warrior’.

Since November, thousands if not tens of thousands of people have been killed in the conflict, which has pushed large parts of the region into famine. Restricted access for journalists and human rights researchers and periodic communications blackouts make it hard to verify a flood of accounts of war crimes, ethnic cleansing and gang rapes that have emerged from the conflict.

‘Everything except my hair was burning’

Genet Asmelash, Kisanet Gebremicheal’s mother, says her two daughters were working in the family home on April 20 when the heavy weapon exploded above.

Eritrean troops are known to be blocking food aid from reaching civilians in the area of central Tigray where they live. Ms Asmelash said there was no fighting in the area, and it was daylight when the shell struck.

“There was a bad smell, something that suffocates…something like a poison or a chemical. It was like a cloud, and I could not see the house.”

There was smoke and fire everywhere immediately, she explained, adding that she was too shocked to run back into the house to rescue her daughters.

Near the girl’s hospital bed in the Tigrayan regional capital, Mekele, lies another victim: a young man with horrific burns covering his face, hands, arms and legs. Eighteen-year-old Yemane Weldemicheal is from a completely different area, a village named Adi Woluwo in eastern Tigray.

“It was April 9. I was alone sitting in my house, which is made of stone and mud. A heavy weapon landed into the house suddenly.

“It has a suffocating smell. It made a fire inside the house. I was burning immediately. Everything except my hair was burning,” he told the Telegraph.

Mr Weldemicheal says both Eritrean and Ethiopian soldiers were in control of the area when he was hit, and there was no ongoing fighting.

Medical staff say they have seen more child victims and that they suspect many others died of their wounds before they made it through military roadblocks to the regional capital.

“This could easily be the result of a white phosphorus munition. It is possible that high explosive munitions caused some fires. But this seems more like an incendiary weapon like white phosphorus,” said Dan Kaszeta, a chemical and biological specialist at The Royal United Services Institute, a defence think tank.

Ethiopia is a signatory of the Chemical Weapons Convention, which bans the use of weapons like mustard gas, while Eritrea is not. Neither country has signed the Convention on Certain Conventional Weapons, which bans using incendiary weapons like white phosphorous on people.

The Telegraph asked the Ethiopian and Eritrean governments for comment. Neither replied.