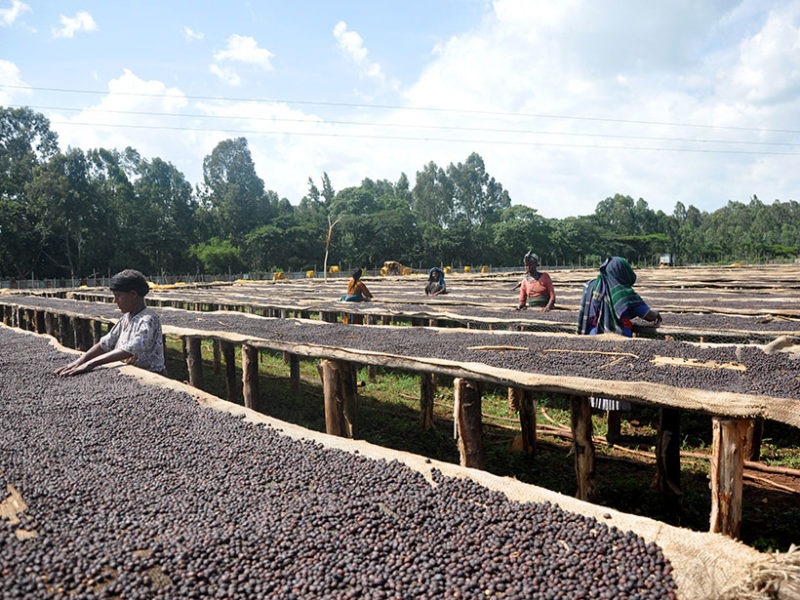 New research suggests climate change may radically redefine the regions best suited to grow one of Ethiopia’s most valuable crops. Photo People sort through coffee beans on huge outdoor tables.
Workers sort through drying beans on a farm in Gojjam, a northwestern region that is emerging as a new coffee-growing region in Ethiopia. Credit: Mekonnen Teshome Tollera

Relocating Ethiopia’s coffee-growing areas to higher-altitude regions will be a key measure for climate change resilience in the country, a team of researchers suggests.

To study the effect of climate change on Ethiopia’s coffee landscape, researchers applied the high-emissions Representative Concentration Pathway 8.5 climate modeling scenario. It predicted that a temperature increase of more than 2°C could occur by midcentury across much of Africa and exceed 4°C by the end of the century. This change could render up to 59% of Ethiopia’s current coffee-growing landscape unsuitable for growing coffee, said study coauthor Sebsebe Demissew, a natural science professor at Addis Ababa University in Ethiopia.

Ethiopia is the home of Coffea arabica, originally a forest plant restricted to the highlands and today the most prominent cultivar in the world. Arabica and other coffee varieties account for more than 30% of Ethiopia’s exports, amounting to almost 240 metric tons in 2019.

About 15 million people in Ethiopia are involved in some aspect of the coffee economy through farming, distribution, or sales. Meseret Desta, president of Ethiopian Women in Coffee, said, “Women in Ethiopia do 60% of the work in the coffee value chain.” She said that work involves “harvesting, washing, and sorting coffee cherries…as well as roasting and brewing. Men mostly step in when we talk about loading and selling the coffee.”

Women account for 60% of the coffee value chain in Ethiopia, including farming (as this woman is doing), distribution, and sales.

Study coauthor Aaron Davis, head of coffee research at Royal Botanic Gardens, Kew, in the United Kingdom, said that climate change will negatively impact much of the current coffee-farming landscape of Ethiopia. Coffee varieties in the country, especially those grown in low-altitude areas, are likely to disappear before the end of this century because of a hotter, drier climate.

In fact, according to another study by Davis, 60% of coffee species in the world are threatened with extinction. “Species that have potential to be used to breed and develop the coffees of the future, including those resistant to disease and capable of withstanding worsening climatic conditions, are among the coffee species threatened with extinction.”

Davis’s article was published in 2017 in Nature Plants and was the result of a collaboration with in-country partners for the project Building a Climate Resilient Coffee Economy for Ethiopia.